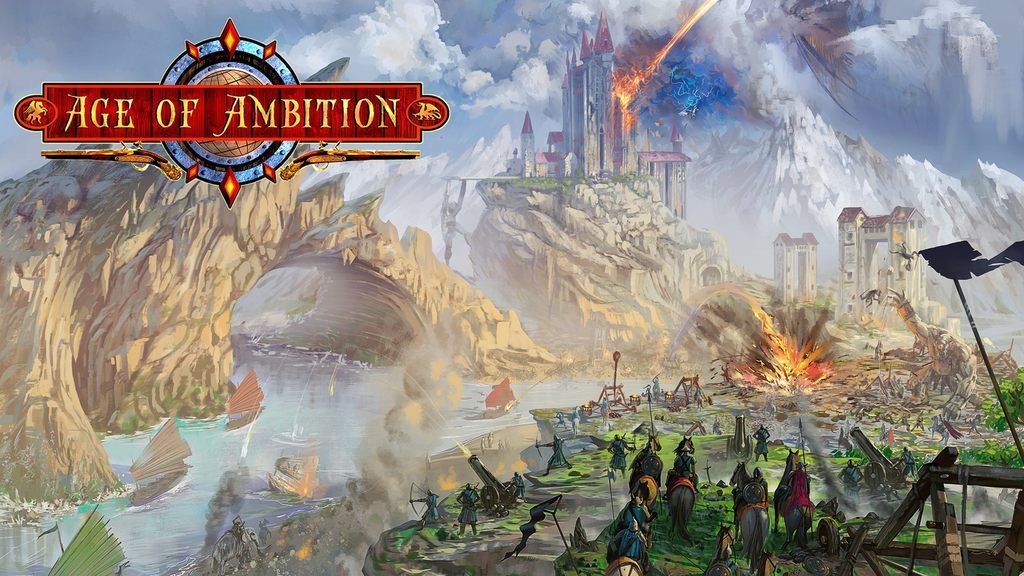 Age of Ambition is a tabletop roleplaying game set in an age rapidly leaving the traditional fantasy milieu behind. It's the game of forward-facing fantasy! Where the heroes help guide the world into a brave new era of promise or peril.

Latest Updates from Our Project:

On October 22nd, the final few Age of Ambition rewards were mailed out. If you live in the United States and are still waiting a physical reward, you should should receive yours very soon. If you live elsewhere in the world, your rewards are likely still en route, but are on the way.

If two weeks from now your reward has not yet been delivered, please contact us and we will look into the matter to make sure you receive it.

The Future of Age of Ambition

If you like Age of Ambition and want to see more support in the future, with published adventures and other supplements, you should check out our Patreon!

This is how we plan to fund future supplements for our game lines, because it helps us gauge interest in different concepts, and gives us a better estimate on what our final production budget should be. This also means we can afford to pay our artists, writers and editors a fair wage for their work.

A Final Thank You

You are all wonderful people, and Age of Ambition wouldn’t have been possible without you! From all of us at Tab Creations: Thank you! We hope you enjoy playing the game as much as we enjoyed making it.

We’re always interested to hear actual play reports, as well as seeing pictures or reading reviews. We’re always looking to improve our games and count on players for useful feedback.

If you’re interested in helping spread the word about the game, we could also use ratings or reviews on places like DriveThruRPG, ENWorld, RPGnet, RPGGeek or Reddit.

And because we can’t say it enough: Thank you so much for your support!

The good news is that the majority of the Deluxe Box rewards have now been sent out, and we've already started to hear from backers who have received them.

We're so excited to get this game into your hands! And look forward to reading your comments and reviews in social media and online forums!

The less good news is that the shipment of books we received from the printer was several copies short of what we ordered. We've already contacted them and those missing books are on the way, but it means that it will be another couple weeks until we can send out the final three copies of the Deluxe Box. We're sorry for the delay.

As a result, this will not be the final Kickstarter update. We'll post again in a few weeks, once the last three copies have been sent out.

Good gaming! And thank you so much for helping make this game a success!

Things have been going well. Since the last update we've released Will to Power. And Time Forgot will be released tonight! These are the final two adventures unlocked by the Kickstarter, meaning that after tonight you should have every unlocked PDF in your hands (er... in your computer).

Today we are also placing orders for the Deluxe Box backers. That means all of the individual components will be sent to us, then we'll sort them into each box and those boxes will go out by mail to backers all around the world!

Next month is likely to be our final progress update. By then we hope to report that all rewards have been sent out, and that many of you will already have the book in your hands.

We hope you've been enjoying the game! And thank you so much for making this possible.

Hello Age of Ambition backers! We've made good progress in the past month. Since the last Kickstarter update we've released:

The former was a surprise release, sent out as a special thanks for bearing with us as we deal with the printing delays caused by COVID-19. The latter is the first of the three adventures unlocked by the stretch goals.

One other adventure, Will to Power, has also been written and is currently being edited. The final adventure, Time Forgot, we'll begin writing in the next few days. I expect the writing to be completed by the end of July, but the proofing process means the release won't happen until August.

While placing the order for the physical books, some backers were erroneously sent a print-at-cost coupon for the core rulebook. I just want to let everyone know that you don't need to use this coupon.

If you are receiving a physical book as part of your Kickstarter reward, we will be mailing it to you. So just disregard the coupon, unless you happen to want a second copy.

As you may have surmised from the "oops" statement, we have just placed the core rulebook order for the $40 Physical Hero backers. Books will be sent out as soon as they are printed. However, under the current pandemic conditions, printing is taking longer than usual. It will likely be 3 to 4 weeks before the books start to ship.

The order for the $100 Deluxe Box backers will be placed as soon as the final two adventures as ready, as that tier includes all of the adventures and other supplements in print.

That's all for now. Good gaming and stay safe, everyone!

On May 28, as scheduled, we released the corrected Age of Ambition PDF and then ordered the physical proof. We received that proof in the mail yesterday, and it looks great! You can see a picture of it with some of the other accessories below.

Meanwhile, we've also continued to release the various supplements and other bits unlocked by the Kickstarter. You should have received DriveThruRPG download codes for them in your email. If you haven’t received the codes, feel free to contact us and we’ll make sure you get them. So far we've released:

The only stretch goals we haven't yet released are the three unlocked adventures. One of them, Out of Shackles, has been written, edited and the proof ordered. The other two, Will to Power and Time Forgot, have been outlined and will be written in the upcoming weeks.

Finally, we have received the second printing proof of the Deluxe Box, and it fits the contents nicely! You can see it in the above picture.

We are currently debating whether to wait and send out all the physical rewards at once, or whether to send them out in two waves: the Physical Hero backers in one wave and the Deluxe Box backers in the second wave. There are logistical pros and cons to both.

If we wait, then rewards will go out as soon as the three unlocked adventures have been released. I expect that the adventures will be fully written and edited by the end of July, but the time it takes to order and review the printing proofs will almost certainly push the shipments back into August.

We'll make our decision in the next couple weeks. But in the meantime, you are our loyal backers and we want to do right by you. So if you have strong feelings about how we ship the rewards, let us know in the comments on this post.

We hope you've been enjoying the game!